For the past two weeks we’ve had an influx of cats in the neighborhood.  We have SEVERAL neighbors who have outside cats and with some new neighbors they apparently brought new cats.  great.  Did I mention I’m not a cat person?  After college, my roommate had two cats and they were pretty cool.  Just did their own deal and once in a while they’d snuggle.  That was it.  No commitment on my part and it was a peaceful coexistence.  Unfortunately, as I’ve gotten older, I have noticed a propensity to sneezing and itchy eyes after prolonged exposure to cats.  Which made it easy to rebuff the kids as they know “Mom is allergic”.  Instead they’ve begged for dogs, rabbits, hamsters…..even fish.  For the last few years I’ve had my hands full enough with kid-business, never mind adding in a pet, regardless of the variety.  Now with Daddi-O home, the requests have doubled.  tripled.  quadrupled.  ugh.  they.  are.  relentless.  I sometimes have to resort to feigning confusion to their requests, not understanding English.  whatever it takes. 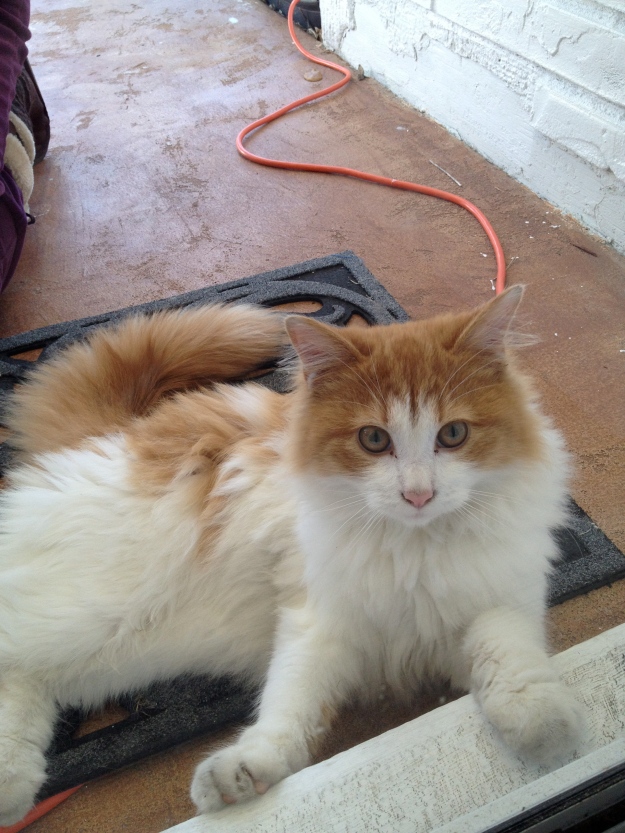 The other cats left us alone.  But this one, named Caramel by the little girl who visits the neighbors occasionally, came over, ALL THE TIME .  (Interestingly enough, we asked around and no one claimed her.  she belonged to no one.  yet several neighbors fed her.  it’s a total mystery where she came from).  She stared us down from the storm door.  Stretched on the windowsill.  Mewed.  Purred.  Basically captured the kid’s hearts one by one, hook, line and sinker.  Shoo. Shoo.  Go home, kitty.

She started sneaking in the house if the door was left open.  I had to pick her up one day and scoot her back out.  That furry body.  That swishy tail.  The ginger and white coloring (in a house FULL of redheads, we notice these things…)  Those big hazel eyes.  Puss-in-boots.  Without the boots.  Then I realized she’s not a cat yet, but that kitten/cat.  Dang it.  She reeled me in, too.  And I didn’t sneeze.  Hmmmmmm.  Nevertheless, I was NOT taking this kitty.  Shoo.  Shoo.  Go home, kitty.

I compromised, she became my mission to find a “No-kill” rescue home for her.  My good friend, whom I affectionately refer to as “Cat Lady”, steered me toward a group who did this.  The gal was super receptive and had contacts to get her to a vet and update shots and spay her on the cheap.  But…….with adoptions “in the tank” according to her, she’d see what she could do. It’s a conundrum of what to do in the meantime.

Hubby and I talked about my conversation with the rescue group gal and agreed to donate to her shots/spay, but then I realized I was willing to give it a go.  If he would.  I had to give him the hard sell:  cats are independent, she’s very social, the kids love her, it would TOTALLY get us off the hook for a pet.  Quite honestly it was an easy sell.  We agreed if the allergies got out of hand, we’d find her a new home….which would be excruciating, but we agreed to take it one day at a time.  A quick trip to Wally-world and we were supplied up.  Her vet appointment is this coming week.

For now, I am washing my hands and not touching my face.  harder than you think.  She is cuddled up and purring.  In my lap while I work on my laptop.  In Hubby’s lap while he works.  Sleeping soundly while we watch a movie.  Chasing her catnip mouse and feather stick.