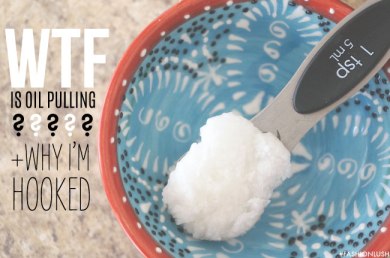 This week I saw the above post on Facebook on a friend’s page.  Intrigued by the title, I checked it out..b/c I have never heard of Oil Pulling and it looked gross and fascinating.    So, I was all in.  Curious though, have YOU ever heard of this?

Apparently, its age-old and a natural detox.  The added benefit of whiter teeth….I figured I’d give it a try since we actually have coconut oil in the house (although you can use other oils, too).  Here’s how it went down:

Round 1.  I took a teaspoon of coconut oil and put it straight into my mouth and began to swish.  Aaaaaaand immediately gag.  And spit.  Most disgusting texture of goo EVER.  Seriously.  Just beyond describing.  I was bummed.

**Prior to swishing, I informed the kids of what I’d be doing.  Naturally, I pick the time to do this during the morning get-ready-for-school/work-time.  Needless to say, there were a hundred and one questions WHILE I was swishing and so the whiteboard became quite handy.  And charades.

The second day went a little smoother.  With only one kiddo up and both of us knowing what was going on, I STILL had to use the whiteboard , but it seemed to go quicker.  Ish.  That girl can TALK!!!!!!

Day 3.  No one awake.  Hubby gone for an early meeting.  NO whiteboard needed.  I did some online banking and next thing you know the timer went off.

A few days of personal research here for you, but I’ll keep you posted as it goes along.  A few things and many links for you to consider:

A few links for your own perusing, because if other people have done books and talks and all the legwork, you should read them not my parroting…this is mainly MY experience thus far.

That’s plenty to get you started, there’s a bajillion more out there on the webz.  Do.  Or do not.