The best laid plans come to a screeching halt when the school nurse calls with a vomiting kiddo in her office.

Fortunately, Popop to the rescue with a quick pick up and chill out time on his couch until mom picks up the little pukey miss on her way to her hair appointment (on lunch break).

Dropped her off at home to rest and then checked on her after hair appointment, set her up with saltines, powerade, water bottle,  TV remotes, telephone and garbage bucket.

Back to work to relieve for lunch and see if I could tough it out, but between the horrendous weather and the very sad panda at home, I left early with my friend’s blessing, picked up biggest boy from the bus stop, was able to tend to sickey girl and then picked up the middle schoolers while dropping of the big guy for work.

Friday night we were testing out the waters of empty nesting.   Saturday we revisited the world of 2 kiddos (oddly quiet) and last night,  blessedly we had the whole family back under one roof.  Just the way I like it.

With the return of the girls also came the return of the sun after many days of rain and gloom.  It was awesome.  Low humidity, sunshine, family home, my productivity was through the roof and there was pep in my step.

Somehow we managed to keep the girls occupied and kind until exhaustion took over and one fell dead asleep with the light on at 8 p.m.  The other, had some math homework to finish up in preparation for a test today.  Now, I ask you….”who gives homework on a FRIDAY and a test on MONDAY?!?!?!??!”  Basically, it was a recipe for a meltdown which absolutely occurred.   The child is more afraid of her teacher than her parents.  It was pitiful, heartbreaking and brought out the Mama (and Papa) bear in us…shoot, even biggest brother joined in on the calming.  Finally, we convinced her to go to sleep and we would tackle it in the morning when her brain was rested, recharged and ready for learning.

Somewhere around midnight I was awakened, did a house check, realized the oldest was up to use the restroom, had a brief chat and then back to bed.  And sleep.  Elusive.  Toss.  Turn.  What the????  I didn’t even have coffee yesterday!!!!

Finally settle in and drifting back off to sleep and our younger son started a coughing jag.  Now 1: 30 a.m.  Up with him….water, cough medicine, hug.  Back to bed.

2 a.m.  I feel like the commercial…”how many more hours until I have to wake up?”

From empty nesting to newborn.  OY.  World of difference, folks.  World.  Of.  Difference.

Bringing it to the 7 QTs with Jennifer Fulweiler and crew….Must be FRIDAY!!!

This week I saw the above post on Facebook on a friend’s page.  Intrigued by the title, I checked it out..b/c I have never heard of Oil Pulling and it looked gross and fascinating.    So, I was all in.  Curious though, have YOU ever heard of this?

Apparently, its age-old and a natural detox.  The added benefit of whiter teeth….I figured I’d give it a try since we actually have coconut oil in the house (although you can use other oils, too).  Here’s how it went down:

Round 1.  I took a teaspoon of coconut oil and put it straight into my mouth and began to swish.  Aaaaaaand immediately gag.  And spit.  Most disgusting texture of goo EVER.  Seriously.  Just beyond describing.  I was bummed.

**Prior to swishing, I informed the kids of what I’d be doing.  Naturally, I pick the time to do this during the morning get-ready-for-school/work-time.  Needless to say, there were a hundred and one questions WHILE I was swishing and so the whiteboard became quite handy.  And charades.

The second day went a little smoother.  With only one kiddo up and both of us knowing what was going on, I STILL had to use the whiteboard , but it seemed to go quicker.  Ish.  That girl can TALK!!!!!!

Day 3.  No one awake.  Hubby gone for an early meeting.  NO whiteboard needed.  I did some online banking and next thing you know the timer went off.

A few days of personal research here for you, but I’ll keep you posted as it goes along.  A few things and many links for you to consider:

A few links for your own perusing, because if other people have done books and talks and all the legwork, you should read them not my parroting…this is mainly MY experience thus far.

That’s plenty to get you started, there’s a bajillion more out there on the webz.  Do.  Or do not.

Day one of a seven-day stretch of blogging fun/torture/chaos with Jennifer Fulwiler and frenz….let’s see I clocked in at about 100 or so, enough blog reading to last a while I’d say.  So stay tuned all week-long. 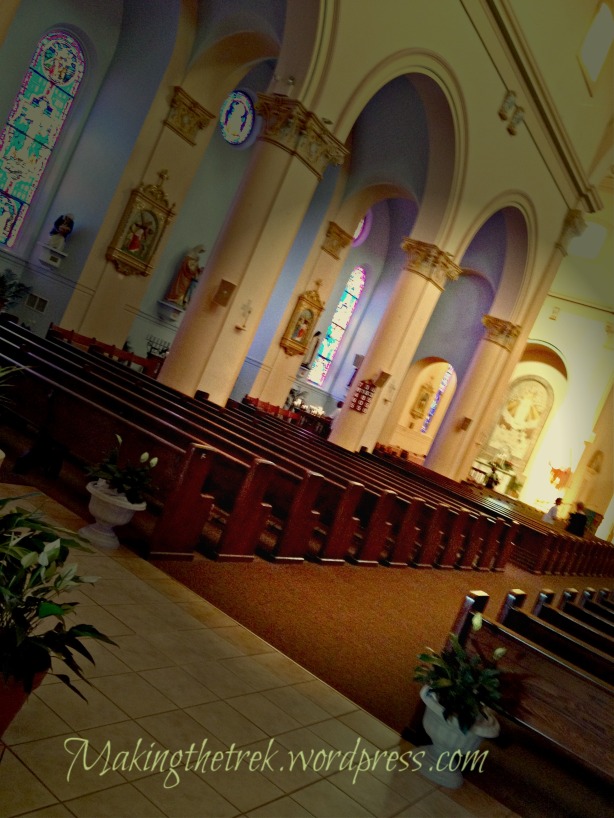 *not our regular church, this is the local Basilica. Beautiful church.

Funny how church life mimics life in its constantly changing routine.  When the kids were little we tried the cry room, the right up front, occasional staggering of Mass, etc, etc, until we found our fit.  With each child things mixed up again and then settled and repeat.  Now that we (mostly) get through Mass without  major drama and meltdowns….hahaha, who am I kidding?  There’s always someone with an issue, but we aren’t wrestling in the pews anymore, everyone knows how to whisper or just zip it and the general decorum expected at Mass is upheld.  Just as we hit our rhythm once again…it changes.  Again.  le sigh.

At the moment we are at a stage in our family life that we are splitting up Masses.  It’s so NOT my favorite season, but for now, we do what we have to do….and it IS just a season.  Hubby is working with my brother-in-law on Sundays –good for the BIL and good for our family as we work toward debt reduction, but a total bummer on Sunday morning family Mass.  Our 12-year-old is earning volunteer hours so she’s been hitting the Saturday vigil Mass with Dad so she can volunteer with the PreK crew at the 9 a.m. Mass. Our youngest son plays his horn in the 9 a.m. Sunday Mass and both girls have Religious Ed. following 9 a.m. Sunday Mass.  Which finds us all over the place, people.  All.  Over.  The.  Place.  We have been TRYING for a twice monthly Mass on Saturdays for all of us, however, realistically we’ve probably averaged once a month.  Just keep tryin’;  it’s only a season.  My mantra.

Sunday morning’s Mass was funny because with only our youngest and I present, we sat in the front row because she informed me that she only takes the precious blood if less than 10 people go before her.  She counts.  Everytime.  Front pew made us #1 and #2, so today was body and blood.  For the win.

My favorite priest (retired and 90) was there today and in wrapping up Mass he analogized today’s homily message on forgiveness, Agape love and the gospel readings with his disappointment in Ireland’s rugby showing in England recently (in his Irish brogue), “I may love my English neighbors, but I don’t have to like them.”  Funny.  True.

Blessings on the week ahead!